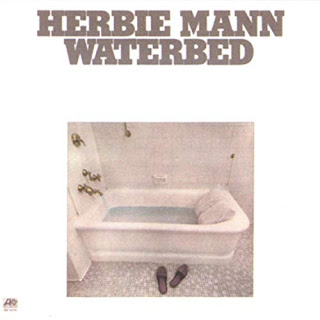 If you need an example of how jazz critics and soul/funk audiences didn't see eye to eye in the 1970s, you need look no further than Herbie Mann. Many jazz critics hated commercial Mann LPs like Discotheque and Waterbed with a passion, and saw them as examples of a gifted virtuoso dumbing his music down in order to sell more records. But young soul and funk lovers -- the ones who made 1975's "Hijack" a hit on black radio -- were digging Mann and didn't understand why jazz snobs had it in for him. Although it contains a funky version of Ben Tucker's "Coming Home, Baby," Waterbed is a vocal-oriented soul/funk project first and foremost. In fact, it's one of the strongest commercial albums he recorded, thanks to memorable cuts that range from the infectious title song and the haunting "Body Oil" to remakes of Ray Charles' "I Got a Woman" and Joe Cuba's "Bang! Bang!." A dynamo of a singer, Cissy Houston (Whitney Houston's mother) has an excellent spot on the dusky "Violent Don't Be Blue" -- it's too bad she would eventually give up secular music altogether. Unfortunately, Waterbed has long been out of print, but it's worth trying to find if you're a fan of 1970s soul/funk. - by Alex Henderson, AMG