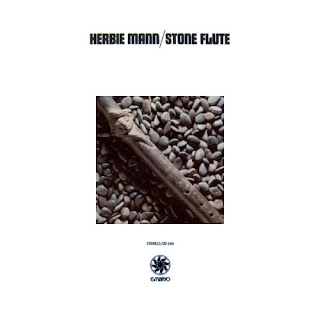 The 1970 record buyer who came across Stone Flute expecting a typical Herbie Mann album in the Memphis Underground vein was in for a big surprise. Instead of funk, there was moodiness. Instead of a groove, there were violins, viola and cello. The feeling was one of floating in space, with the flute sailing freely over the William Fischer arrangements, like a Miles Davis trumpet solo of this, the Bitches Brew era. This is a totally atypical Herbie Mann recording, but one which rewards repeated listening. - by Jim Newsom, AMG.

Artists often fall short when they step out of their trademark sound, but not Herbie Mann, best known for his soulful jazz. Here on Stone Flute, Mann slides into an atmospheric and spacious sound, much as Miles Davis did on Bitches Brew, developing sparse string arrangements that are inter-laced with his magical flute, creating insightfully light exotic and airy washes of psychedelic blissful wonder. Opening the album with “In Tangier,” and a sly nod and reference to the original version laid out by the legendary 60’s troubadour Donovan, with Mann creating an intoxicating stoned out celestial flight across the galaxie. Locked in tight with the mind-bending heyday of the mid 60’s swirling from his flute, he moves into “Flying,” a profound influential Beatles instrumental from The Magical Mystery Tour, creating a vibe that is equally as hallucinatory. The rest of the tracks are top shelf straight forward thinking jazz that grooves along at a steady pace, exhibiting Mann’s unmistakable restraint to allow things to flower, and then moves on in a contained, yet free spirited manner. Stone Flute is a unique body of work from the Herbie Mann catalog, with minor hints at late 60’s and early 70’s experiments into the realm of fusion and sound exploration … though not quiet, because it is very accessible. Nevertheless, this is not an album you’re gonna want to miss, as it goes down easy, holding your attention, without demanding it. - by Jenell Kesler, Psychedelicbaby.blogspot.com