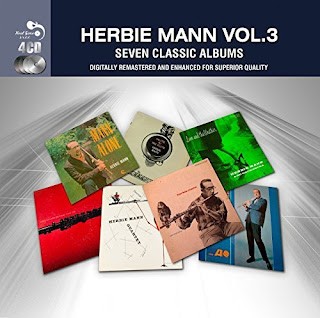 Musician Herbie Mann was born Herbert Jay Solomon on April 16, 1930 in Brooklyn, N.Y. After exploring the Army, Mann joined the Mat Mathews's Quintet and began recording work. He did some music writing for T.V., but his real joy came from his project with the Afro-Jazz Sextet, which was an international success. Mann's musical interests were not limited to jazz; he also played bop, rock, pop, reggae, and disco. Mann has also been a producer and record label owner. He has recorded almost one hundred albums for more than ten recording companies. - Amazon.com

Flamingo:
An early showcase for the cool, compressed flute work of the young Herbie Mann — a style that created a great bridge to jazz for so many later players on the instrument ! The Mann heard here isn't the overblown, soul-drenched Herbie of the 60s — but a player who's very careful with his tone and timing, yet still able to swing incredibly well! Herbie's solos are a masterpiece of economy — and set up strongly in a hip quartet that features some equally careful work from Joe Puma on guitar — plus Charles Andrus on bass and Harold Granowsky on drums. There's a number of strong original tunes on the set — numbers written with a bit of wit and angular finish... Dusty Groove, Inc.